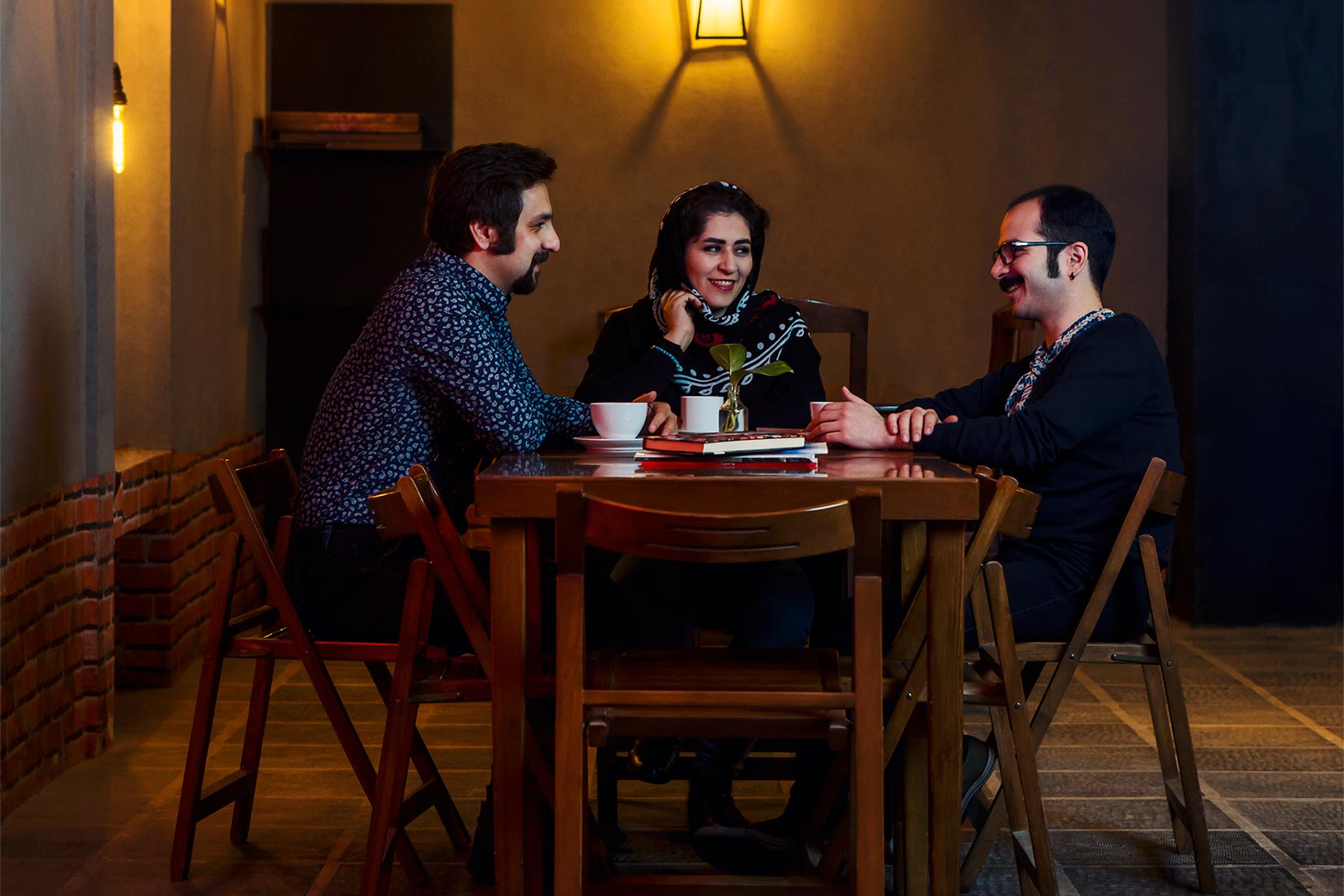 The oldest visual records which in the opinion of some researchers account for the existence of ancient record of group playing in the ancient civilization of Iran are designs on stones and potteries found in Lorestan and Khouzestan province (Elam ancient civilization province). Designs indicating some harp, a brass instrument and tabla players and a singer all together.

Since those eras with all various rises and falls of culture, civilization, language, geographical boundaries, political boundaries and ideological beliefs of the Iranians and with considering the dark periods we are unacquainted with, it is virtually definite that the pervasive tendency in the Iranian musical life was singing which is inevitably associated with individualism culture and if by any rare chance, some indications of group performance are found, they will be yet a collection of unitary components and not a composite of combination with the aim of producing an ultimate work of a joint effort. A process whose systematic, organized and perfect form is peculiar to the classical music culture of Europe in the following decades of renaissance and other countries, including Iran in the 20th century, according to their competence and needs have been influenced by that.

Thus group playing even in the oldest forms of the contemporary time, including “Okhovat society” orchestra (established in 1901), is a new event. The only grasp of orchestra and group playing possessed by everlasting-soloist musicians of the late Qajar period was merely sitting next to one another in the simplest way and tuning the instruments and voices without considering the proper function of the group performance (from monophony and heterophony to polyphony), the balance of the instruments and voices, partiture, timbre, the suitable notes for a fine performance and many other difficulties.

Throughout the time there were some other groups like orchestras of Morteza Mahjoubi, Parviz Iranpour, Barbod Community, Majid Vafadar, etc., which were indeed also well-received, were working, holding concerts and recording disks without paying attention to the required principles for performing a group playing to perfection, but only through auditory stimuli and by relying on ear, musical intelligence and a lot of practice.

The rather reasonable persistence of Golha Orchestra and Great Radio Orchestra (established in 1960) led to the make-up of the larger orchestras that comparing to the previous models had more instruments involved and were more complex and more of European style. Orchestras such as Farabi and Nakisa conducted by Morteza Hanane, Fereidoun Naseri, Mostafa Kasravi and Hossein Dehlavi and also after 1978, Iran National Orchestra (established in 1994, by Farhad Fakhreddini) is a noticeable return to Golha period conducted by Javad Maroufi and Rouhollah Khaleghi.

There was only one perfect and considered example of Iranian musical group playing which adhered to the academic and practical principles and rules of this particular branch of musical art in all those years between 1936 and 1966: The National Instruments Group (before1977) which was renamed The Maestro Payvar Group (established 1979) conducted by Faramarz Payvar, who was also the santour player.

Apart from this unique case, other ensembles with Iranian instruments would more and less play with a perception like players of Okhovat Society era and their most efforts were in tuning the instruments at the same pitch and playing unison melody lines – Often with a mild harmony of the bass instruments- and of course in 1970s the new technology of recording, mix and mastering and later tuning facilities brought a substantial help to them.

This deficiency could be in fact the result of a primitive tendency and the avoidance of innovation culture and lack of persistent collaboration in the live performance (whether in private meetings or on stage) and not taking responsibilities for doing a lot of practice in order to gain a profound perception of the content of the composers’ works and how to create a voice to impress.

Hence our outward traditionalist and authenticity-oriented music tired from dreariness of ineffective meaningless repetitions needs us to revise the principles and the logical pillars of the live musical culture. We need to fully acknowledge our vaunted and prejudiced tradition by research and study, not solely by infatuation and feelings. It needs to differentiate the tradition from authenticity and do not sanctify the old achievements. Observe the past from present-day perspective and relearn and accept the logical and invariable principles.

As far as the writer knows, the establishment of Paliz ensemble is promising news for a thoroughgoing look and a studied activity to satisfy Iran’s today’s musical culture needs. The instrumentation, partiture and the timbre of today’s orchestra, undoubtedly, is neither a copy of Okhovat Society ensemble, belonging to Darvish Khan period, nor is the sound of Vaziri, Khaleghi and Maroufi’s orchestras nor Payvar orchestra, nor Aref and Sheida ensembles and it indeed should not be so.

Constructive pillars and the main foundation of the art of group playing are the points to be noted carefully, which is about knowing of the capacity of each instrument and artistic ability of its player, relying on accurate notation and keeping sticking to it while performing, trying to level the quality of performance on stage and the real performance (live, not line) in the studio, giving and receiving commissions, trying to create a warm and friendly atmosphere between the players (players and singers), keeping practice night and day and getting mingled with the emotional essence of the pieces to be played.

In one word, it is gaining “the music delight” again and getting united with the undying freshness of joy of listening to music; a joy which is an ultimate goal of music in every culture. The core of the issue has been neglected and has been strayed from for a long time due to various causes and we have been deprived from this essence of human life.

Buy From iTunes
Buy From Beeptunes